Brahmi: Benefits for the brain and more 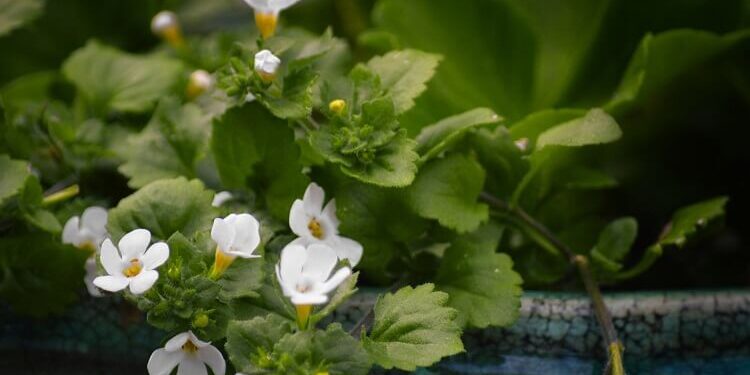 Brahmi, otherwise known as Bacopa monnieri, has a long history in Ayurvedic medicine – especially for its ability to improve memory and intellect (known as medhya).

Traditionally it has been used to heal the nervous system; improve digestion; improve learning, memory and concentration; and to help with anxiety, skin disorders, respiratory issues (such as chronic coughs and asthma) and even insanity and epilepsy.

In the West it is seen as a nootropic herb that improves mental performance.

Brahmi is also known as Bacopa monnieri, water hyssop, thyme-leaved gratiola, Indian pennywort and herb of grace. It is a member of the Scrophulariaceae family.

It is a non-aromatic, creeping ground cover with small succulent leaves and minute, bell-shaped white flowers. It is native to warm wetland environments across the world. It is a very adaptable plant that can grow submerged in water or in wet soil.

The whole plant can be used for medicinal purposes, but extracts from the stem and leaves are mostly used.

Action on Doshas – Balances all doshas

The Compounds Found in Brahmi

The leaves contain saponins, including bacosides (Bacoside A, bacoside B, bacopasaponins) that are believed to be responsible for the therapeutic properties of the herb. Other compounds include flavonoids (for example apigenin and luteolin), alkaloids (for example brahmine and herpestine), glycosides, sopogenin and other phytochemicals (for example betulinic acid, wogonin and oroxindin).

What some of brahmi’s benefits?

There has been a great deal of research into brahmi’s many benefits. Some of these include:

There has been plenty of interest in brahmi’s effect on brain health. In a study by Jeyasri et al, they identified 52 active compounds with multiple actions. This suggests that it works on various levels, regulating many processes (especially when it comes to neurological diseases).

In relation to quality and speed of memory, learning, and attention, studies (1,2,3) have shown that there has been increased enhancement in these abilities with those taking brahmi extract over a 12-week period.

Traditionally brahmi has been used as a nervine (a type of herb that calms the nervous system). This may be due to modulation of the serotonergic system. 8

Bacopa is considered an adaptogenic herb. Extract of this plant has been shown to work as a natural stress reliever by helping our bodies better handle or adapt to the stressors in our lives. It’s also one of the herbs that is used in Ayurveda to induce sleep, especially when stressed or anxious.

Many in-vitro and animal studies have shown that brahmi has an antioxidant and free-radical scavenging action which is essential for good health and longevity. In particular, it’s good for the nerves, heart and blood vessels. Its high antioxidant levels are also beneficial for those who are diabetic.

Brahmi is used in several forms, including as a powder, capsules, tincture, tea, oil, juice and even as a syrup.

If you’re looking for something to help alleviate stress, help you sleep, or improve your memory then brahmi with milk (dairy or nut milk) is a good option before going to bed.

Though bacopa extract is well tolerated, it is usually used for one to two months.

It should also be avoided during pregnancy and breastfeeding without first consulting a medical practitioner as there is insufficient research on safety for pregnant or breastfeeding women.

Ayurvedic herbs can interact with pharmaceutical medications, especially diabetes and blood pressure medications. It’s advisable to consult with a medical practitioner before taking this herb.

Bacopa monnieri is an ancient Ayurvedic herb that has a variety of health benefits, with a focus on improving cognitive and brain health in people of all ages and stages of brain health.

Shatavari and Its Many Benefits for Women
March 22, 2022

Broccoli: The Cancer-Preventive Properties of This Leafy Green Superfood
August 10, 2020

Turmeric Milk: 10 Benefits of Including This Golden Milk in Your Diet
July 20, 2020